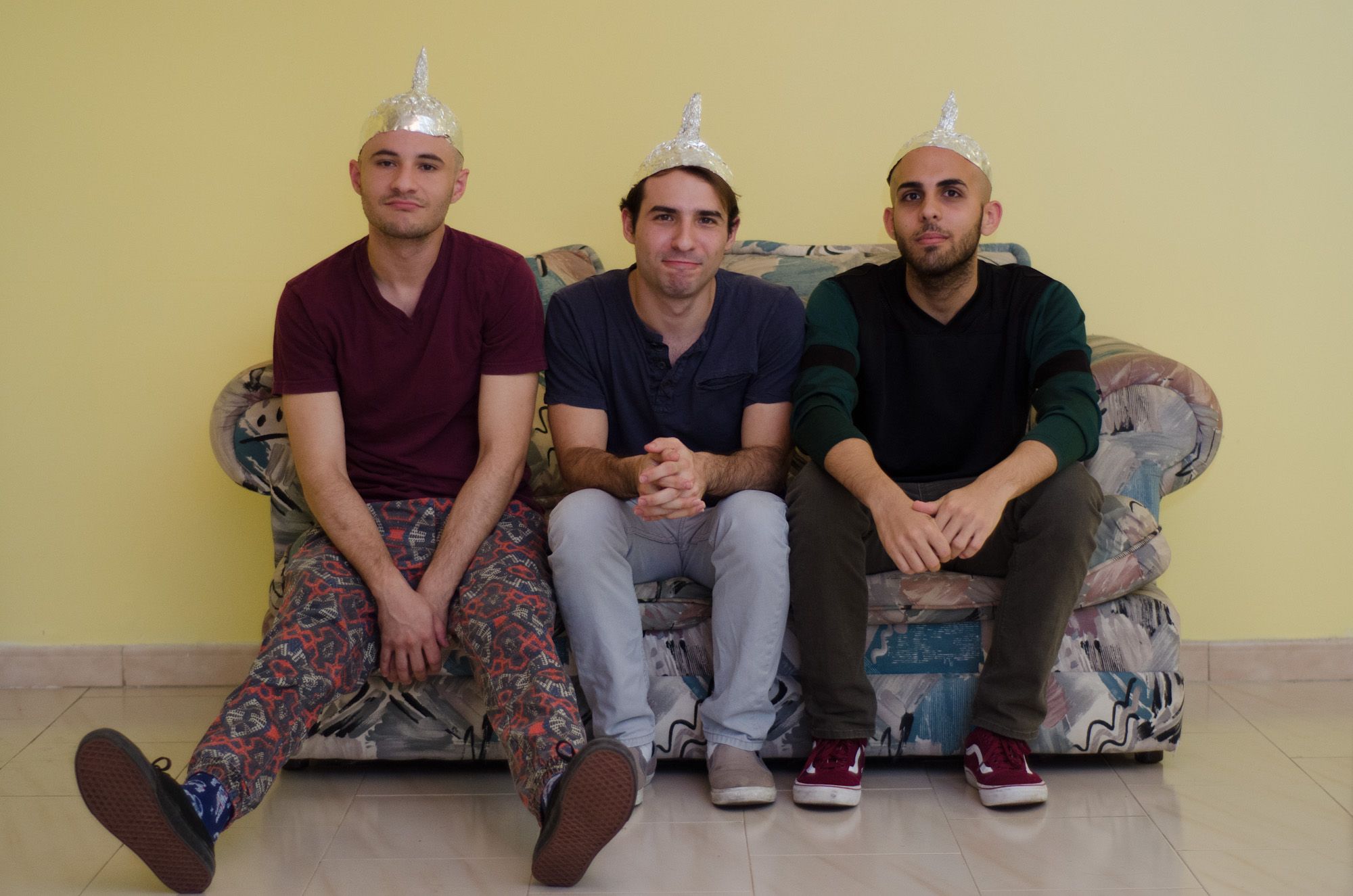 2022 has ended with a rather large and superb list of new releases in the math rock (and math-like genres) scene. In case you missed it (which I doubt), we countdown the best 50 albums of the past year here (plus a curated Spotify playlist).

December 24th was a heck of a day. We were all getting ready for the holidays, counting the minutes to see what was left under the tree. And Space Corolla delivered. The Puerto Rican 3-piece released their debut album ‘Catastrophizing’ on this day and man, isn’t it a goddamn piece of work.

I was giving it a listen a couple days ago and I ran into a coworker who (I guessed by the look he gave me) noticed my headbanging. He asked me ‘dude, what are you listening to?’, so I unplugged the earphones and track 9 ‘Sell your meds’ was on. He gave me that ah-now-I-know-why-you’re-that-way kinda look and just awkwardly smiled. Has that ever happened to any of you, guys? Let me know in the comments below.

Back to business. Space Corolla revive the math core-ish sounds of the 2000’s, with a clear influence in punk; and the intricacy of all their work is something to admire. Since they started in 2017, they’ve released a fair number of tracks, finding their own signature sound on the way. Now, there are no accidents for these guys. All of the tracks are carefully played, recorded and mixed; this is evident even to the unexperted ear. ‘Catastrophizing’ is a blow to the face, no less.

I’m proud of the Latinx math rock scene being Latinx myself and, having the chance to write about superb musicianship like the one shown by Space Corolla is worth everything. But let guitarist/vocalist Johan Rivera tell us more about the band.

Fecking Bahamas: Hello, man, please, tell us: how did the band start?

Johan Rivera: It got started with me, and Pablo Prieto sometime in 2015 I want to say. Pablo (drummer) added me in Facebook by accident. If I remember correctly he was looking for a mutual friend called “Jonah”. “Jonah” at that time was a singer for a band I played guitar for called love device: offline (don’t look it up, we never released anything). I think Pablo saw pics of us playing live and thought I was him. I got pumped when he added me ‘cause I knew Pablo from playing in other mathcore and punk bands in the scene. Eventually both of our main projects fizzled out. I used to post a lot of guitar videos with my FX pedals doing ‘mathrock’ style riffs and I’m pretty sure that got Pablo’s attention. One day he just asked if I wanted to come over and jam. We did, I remember both of us being kinda quiet, small talking. I think we played some Fall of Troy stuff. Eventually our shyness shrugged off, became friends quickly. Pablo actually introduced me to Tera Melos, he probably thought I was already a fan ‘cause of all the videos of me messing with pedals. Eventually I started writing full songs and Pablo had plenty of audio recording equipment so we started making demos.

JR: The name was one of many. The “space corolla” was Pablo’s nickname for his old car. It’s where he and his friends would smoke weed.

JR: Well, I already name drop The fall of Troy and Tera Melos but other big bands are The Dillinger Escape Plan and Protest The Hero. Those are the bands that got us into playing ‘technical’ music, but to be frank we tend to mostly go back to punk bands, a lot more from Pablo’s side: Green Day, Lagwagon, NoFx, A Wilhelm Scream, Decendents. I grew up with a lot of pop punk/2000’s emo, guilty of listening way to much of Green Day, Blink 182, Fallout Boy, New Found Glory, Taking Back Sunday, MCR, etcetera. Those kinda of influences keep me from making overly ‘riff salad’ music.

FB: Tell us a bit about the process of composing.

JR: Well, I pretty much lock myself in a room for days on end making guitar riffs until I have something I can at least mumble words to. After that I re write it about five more times, stop playing guitar and question every decision I’ve ever made in my life for a day or two. And once I’ve replayed the idea for what feels like a month, I share with Pablo and torture him with my terrible, terrible way of explaining what I’d like the drums to do. You know that meme from “It’s always sunny in Philadelphia” where Charlie is explaining his conspiracy theory? Yeah, that’s me. On a side note, I try my very best to not write the same song ‘thrice’. That is what keeps me from writing more often. I don’t think that ‘all their songs sound the same’ is a legit criticism but I am terrified of ever being told that.

FB: What about going from EPs and singles to a full album? How did you come to that?

JR: From the very start I wanted to make an LP. That was like a life goal. At first, we did try, but we didn’t have enough songs and we had trouble finding someone we could trust to mix and master. So, the very first EP was like half of what the original album was gunna be. You could say we used the first EP as an experiment. We kept on making new music while at the same time learning how to record better afterwards. But in 2017 we got hit by hurricane Maria. It took well over a year for Puerto Rico to reach ‘normalcy’. In that time with no power anywhere, I wrote the first Spanish Space Corolla songs. Pablo moved to Florida, and at the end of 2018 I moved in with him in the hopes of taking the band to the states. Not having enough songs in English still to complete an LP, we decided to make another EP with the 3 Spanish songs I had laying around. 3 didn’t seem like a lot so we also recorded a math rock-ish cover of a Latin pop song called “Lento” by Julieta Venegas. That’s the Cordales EP. ‘Cordales’ means wisdom teeth, cause it was a painful time post Maria. That EP has hardly any pedal effects expect for the pitch bending delays in “Lluvia y calor”. The idea was to simulate the sound of the hurricane winds I heard while Maria passed through. No power meant no way for me to turn on guitar pedals and experiment so the songs are very direct and to the point.  Then the pandemic hit, and all of the sudden it was like Maria struck again. But at least there was power. We just recorded singles throughout the course for funsies, just to feel more productive really. Actually, we even manage to finish a whole other album for a whole other band we were in called Cours’D math. Finally, it was last year that Space Corolla finally tracked enough songs for a full LP. And now it’s finally out. I should also mention that everything we do is DIY and it’s hard to take time from daily life to finish projects like these. I write the songs for space corolla but nothing would ever come out if it weren’t for Pablo’s skill as a recording artist and editing everything we track.  He is also the only one who makes our music videos. Honestly, he is like 70% of the band.

FB: What plans do you have for the future?

JR: I really hope to play shows in the states, we did make a few friends in FL. Shout out to the band Elders, super nice and talented dudes. If anyone wants to hit us up for a show in Philly, please let us know.

FB: Any music recommendations for the readers?

JR: Ah, math-rock is already a niche genre. Puerto Rico is so small, there just aren’t enough bands to even call it a scene. Maybe that’s just how it is right now. Way before, like 7 years ago there used to be much more prog post hardcore bands but it kinda died out.

So now you know about it, guys. Space Corolla is a band you need to follow. They are part of this new wave of math rock acts, super talented, super intricate, hyper rad. Check out all of Space Corolla’s catalogue here, support them by buying their new album and, if you feel like, buy is a coffee here.