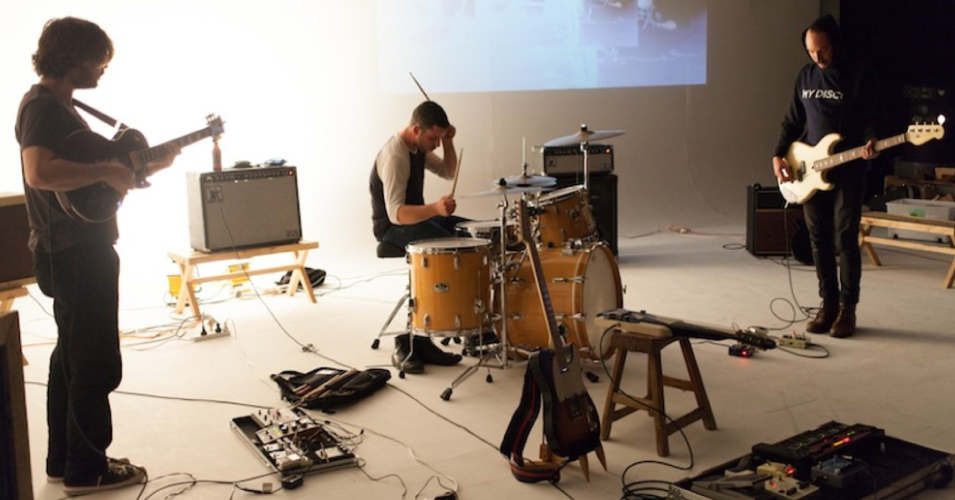 THIS IS YOUR LIFE // SPARKSPITTER

When I’m not basking in the theoretical Leeds sunshine I’m a Melbourne man. Back in June, our Fecking Bahamas writer Tak (whose hometown Fukuoka is 8076km hours north of Melbourne) sent me an e-mail alerting me to check out Sparkspitter from Adelaide (the next closest capital city to Melbourne). At the time I pondered to myself how this surprisingly proximal blend of jazz, prog and kraut-rock had escaped me in my trawls of the Australian music scene. If I can speak broadly, when it comes to uber-angular music, Australia can feel as barren as its drought-stricken outback. Sure, we have a couple of well-polished gems (My Disco, Love Like… Electrocution and Tangled Thoughts Of Leaving, to name a few) but I’ve never really felt a strong presence of experimental music, let alone anything that would constitute a ‘scene’.

For those of you who are still a bit geographically preplexed, Adelaide is on the southeastern periphery of Australia, nestled below the 200,000 square kilometre Nullaboor Plain (an environment generally defined as the ‘outback’). Adelaide’s music history includes pub rock (The Angels, Cold Chisel), hardcore (I Killed The Prom Queen, Shotpointblank) and vomit (Guy Sebastian). And, lo, it slowly appeared in my interview with Matt from Sparkspitter that Adelaide’s experimental music scene is also doing just fine. “There are a bunch of artists in Adelaide who are pretty committed to experimental music: Riley O’Keefe, Harry Freeman, Stuart Johnson, Dan Heath, Dan Thorpe, Dan V, ‎Irān Sanad-Zadeh, Al Thumm, Michael Ellingford, Dave Harry, Brad Cameron. And there are a handful of experimental bands in Adelaide like Emu, Thom Bordism Group, Doe, Ashtray, and Crystal Forehead.” You can’t argue with that. I had overlooked a whole pocket of exciting music, a tucked away oasis in our big desert, if you will. The fact that I didn’t know Sparkspitter was simply due to me not looking hard enough.

To describe Sparkspitter’s music in a sentence would be a shortcoming. While their textures and structural approach to compositions are undeniably ‘mathematical’, the term ‘math rock’ overall is too shortcoming. “There is a tradition of instrumental, angular riffs and odd time signatures associated with the term math rock, but we’re not sure if we really fit inside that description,” says Matt, “Sparkspitter is (mostly) instrumental, and we do use odd time signatures, but we try to fit the “math” inside a looped groove which remains for the duration of the piece. Our current method is to re-contextualise the loop and see where we can take it, rather than assault the audience with unexpected rhythms and unrelated time feels.” In addition to conventional instruments, Sparkspitter employ lap guitars, tambourines, cowbells, xylophones and looping pedals to craft an array of unusual but nonetheless cerebral soundscapes. The eclectic array of sound, mood and tonality that emerges in Sparkspitter’s music is certainly capable of garnering a range of emotions in its listeners. “Spoken language tends to be so specific. We like that the feeling that comes from instrumental music is general, and so it can be imported into your brain-world and applied to your day-dreams. It has the capacity to take you on a journey somewhere, and that place can be very personal. When a crowd is listening to instrumental music, when it is working, the whole place feels very connected, almost breathing as one – instrumental music can be properly transcendental.”

Sparkspitter’s upcoming album, TECHNE, may well continue this legacy. The album’s first single, ‘Vandalis’, was released in May and sounds like someone went at an ice-cream truck with a sledgehammer and played the broken chimes over a pounding 10/4 bass line. Like most ice-cream truck chimes, the sound is compelling, hypnotic and a tad creepy. ‘Vandalis’ was released as a music video (above), depicting dancers attached to a gyrating wooden centrepiece in a neon-lit room and employing the sort of visual trickery Kubrick exploited in 2001: A Space Odyssey. All in all, it encompasses the cerebral experience that Sparkspitter are perfecting with time.

Part of me enjoys that fact that despite being gurt by sea in the 4000 kilometre wide plateau that is Australia, I don’t always need to travel internationally (via the internet) to find exciting, unconventional tunes. And what makes bands like Sparkspitter so exciting is that they effectively blur the boundaries between the canons bestowed upon them by critics and press (including us). Their meticulous exploration of sound; the use of multiple instruments, the exploration of different sounds, the juxtaposition of textures; means that their music becomes a truly subjective affair. In my interview with Matt, his last words were “it makes me happy to know that I experienced ‘Vandalis’ differently to you“. Sums up this band quite well, really.

(i) Patiently await the release of TECHNE