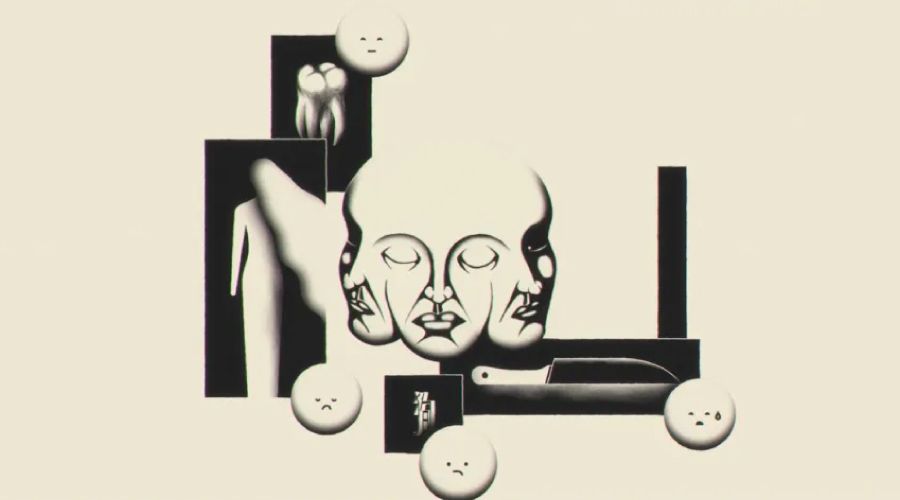 What could we possibly say about Town Portal that we haven’t said before? For all six of you that aren’t in the know, the Copenhagen trio have been bringing their signature brooding style of instrumental math rock for over a decade.

They’re a band with a distinct sonic identity, a band that instill a harrowing sense of forebode through their weirdly unsettling guitar phrases and key changes. They’re a band that took the #26 and #21 spots in our Top 50 Math Rock Albums Of All Time article with their albums Chronopoly and The Occident, respectively.

Of course, there’s more to Town Portal than the music. They are a dark band, but not in the ‘black hair and battle armour’ skin-deep sense. They coolly allude to darker elements of life (and death). Their sound is complemented by references to the cruel bureaucracy of Kafka’s The Trial, the urgency of Roko’s Basilisk, and aesthetics of mortality in vanitas art.

The latter of these has, ironically, been brought to life. Today we are proudly presenting Town Portal’s new music video for ‘Vanitas’, the fiery closer from their 2019 magnum opus Of Violence.

The film, as described to us by creator Gabriele Calvi, is a abstract trip through the sleep cycle, with the aim of visually representing the dark and eerie sounds of the song. Anatomical representations, abstract settings, folkloristic figures, nightmares and still lifes ( vanitas ) follow one another to emphasize the complex structure of the song.

“The original plan was to use this video as an attention booster prior to our US tour in June this year, but as the story goes that never happened,” says bassist Morten Ogstrup Nielsen, “Gabriele’s aesthetic exploration of sleep and dreams is highly relevant now by being some of the few things the pandemic can’t take away from us. Embrace for a long cold winter and venture into the subconscious.”

Town Portal’s ‘Of Violence’ is available on their Bandcamp page. We will also be speaking with the band this Sunday at 9:30am PST on our Instagram. Come give us and Town Portal a ‘follow’ and we’ll see you then!