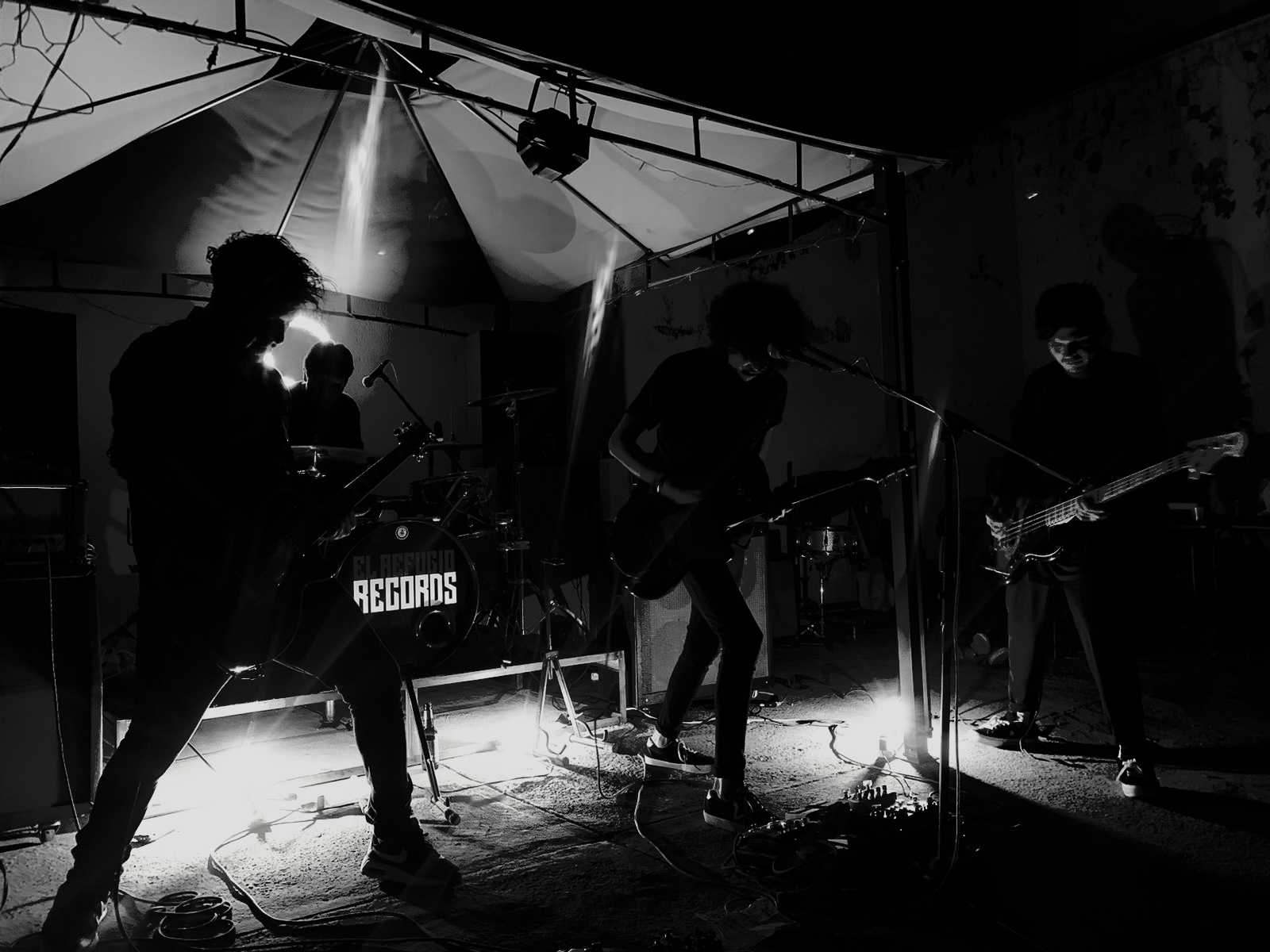 It’s been established that we like heavy music. Even if it’s not our area of focus, it’s definitely worth the while listening and talking about it, though, being math -as a risky statement of mine- the mother of some of those chaotic and bizarre genres.

So, today, as an approach to a post rock-ish new proposal, NEGRVS dig down deep into the core. The Mexican four piece has released their debut album ‘De Lúcidos y Atormentados’, and, as they put it, it is ‘loaded with emotion, based on explosiveness and dynamic’. How darker can you get when your band name literally means BLACK? Enough said.

I had the chance to see them live last year, in one of their first gigs. The heart they put not only in their music, but their performance as well is utterly captivating, full of energy and passion. As I said before, NEGRVS stretch out to a plethora of distinctive musical approaches, from post-metal to screamo, rounding the edges of shoegaze and math core.

I talked with drummer Carlo Ixcamparij, so he could tell us more about the band`s background, here it is:

Fecking Bahamas: How did the band start?

Carlo Ixcamparij: Back in 2018, Carlos and I were fans of all the post-rock/post-metal scene, so we basically wanted to do that. Emilio played bass in another project where Carlos is also the guitar and vocals called Polaroids of Polarbears, so they met there. Israel is the brother of another former member of POPB, and a friend of most of them.

But it was until the second half of 2020 that we could get together and started jamming. In our very first rehearsal, we created Lúcidos and Atormentados. In my perspective, that was the only clue I needed to know that these lads were exactly what I expected: reliable, committed and creative.

CI: It came with the idea that our skin color was different from most of the post-whatever bands. They usually are white (Mexicans or not), and we only had one white member. So it’s kind of like a Mexican or even Latin American joke.

FB: What are the band’s main influences?

CI: Here is where I prefer to make a list:

Carlo – Mostly from post-metal and screamo/powerviolence, but also a lot of jazzy-like parts. Heavy, opulent, fast, but trying to be as dynamic as possible.

Carlos – Mostly post-rock and also violence, he usually puts math-rocky/j-rock stuff. He could perfectly fit in an emoviolent version of ASIWYFA.

Israel – Basically a hardcore punk/metalhead if they had a reverb/delay pedal. He actually had a hardcore punk band before, but likes post-metal and whatever makes you frown.

FB: Tell us a bit more about the process of making the album, and, of course, your first single ‘La suma de todos los tiempos’.

CI: We started creating ‘La suma de todos los tiempos’ as a Zeta-like song (a great post-hardcore band from Venezuela, check’em out), just as Lúcidos and Atormentados. We even tried telling someone to be a singer while we played, but it didn’t quite work out. After that, we started to develop our sound into something more post-rock/ethereal, and recreated and reinterpreted LSDTLT as something more deep and less punk.

FB: What are the plans for the future for NEGRVS then?

CI: We have short-term, mid-term and long-term goals. Short-term is just trying to make our music known, show our two different sets (one more violent and heavy, the other more post-like and deep), share it with everyone, and most importantly, have shows and gigs in our city and in a lot of places. Mid-term is recording our next album, create new songs, travel to other countries and even make music for movies or any visual treat. And in long-term is playing our music in other countries in Latin America and at Dunk!Fest, VIVID, ArcTanGent, or any post-rock festival that could have us. Also play at Audiotree or KEXP.

FB: Wow, those are GOALS. Anyway, lastly, do you have any recommendations for the Fecking readers?

CI: Our recommendations, musically speaking, for everyone out there reading that listens to our crap and are not quite familiar with it could be Intronaut (preferrably Valley of Smoke), Zeta, Rosetta, Kerretta, Wohl, Holy Fawn, Violet Cold, And So I Watch You From Afar (especially their first album), Lightbearer, The Mars Volta, etc.

As musicians and individuals, I think the most important thing as a band is talking through all the issues, being honest, open, avoid all gossip as possible, be constant and consistent, respect your bandmates, the promoters, the places and your fans, listem to them. But the most important of all: play, don’t let the place, the people nor the gear stop you. Play as good as you can, be passionate in front of 5 or 50000 people.

As you read, NEGRVS will try to get into your head, and you must let them. I approve.