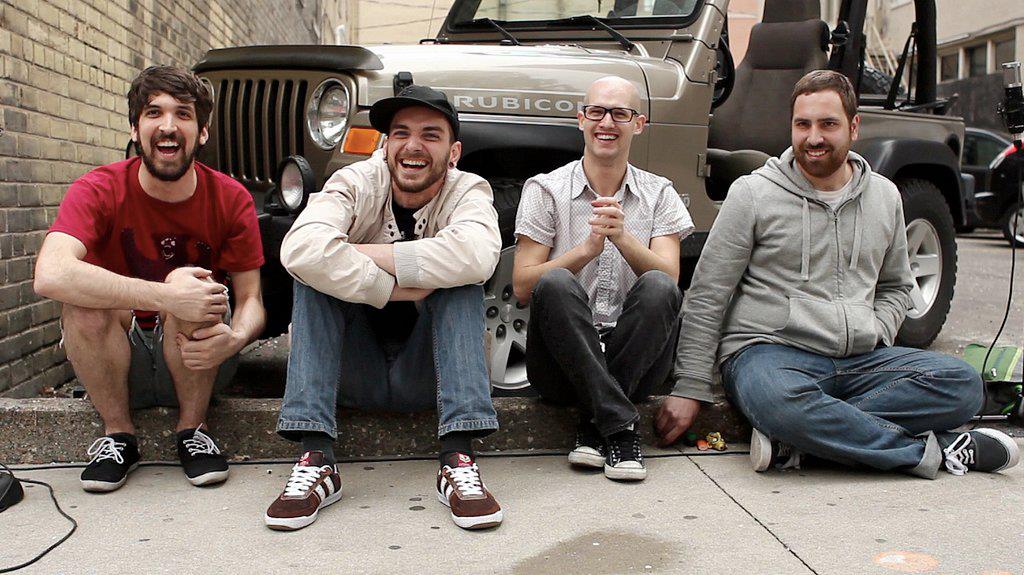 FOCUS // “Our Band Name Sucks”: the story of The Bulletproof Tiger

Just across the river from Detroit, over the US-Canadian border, lies a town called Windsor. In a non-descript high school, three boys meet and start playing music together. Fueled by the dedicated yet diverse live music scene in the area, they take a collective interest in the progressive, expansive sounds of The Mars Volta, Battles, and Explosions in the Sky. Their personal tastes eclectic, they find their common language and begin playing what guitarist Corey Temesy recounts to me as ‘tech-prog’.

Their band is simply called .D. Footage of their early efforts can still be found online. Although the early iterations of what would be The Bulletproof Tiger’s dexterous style are clearly audible, it wasn’t until drummer James showed Corey an old video of Spencer Seim and Zach Hill of Hella performing ‘Biblical Violence’ that he truly saw the potential within the sound. What initially sounded like non-musical noise, slowly began to make sense and resonated deeply. But it was Spencer’s hands that intrigued Corey the most – they were continually up on the neck, darting around the fretboard like an irritated pianist. This extended technique of guitar ‘tapping’ was slowly becoming synonymous with the burgeoning, frenetic sound associated with mid-00’s bands like Piglet, Giraffes? Giraffes!, and Maps and Atlases. It was the discovery of these bands, combined with a profound desire to try something new, that inspired Corey and his friends to take on that sound. The band saw the deviation as a mission – Joe, the bassist, spent hours practicing the technique on his bass and James learnt the highly percussive poly-rhythmic style conducive to math-rock authenticity, helped by a natural ear for timing and beats.

Of course, at this moment in time, the term ‘math rock’ was but a twinkling star in the distant void of their collective mind. It was only when the phrase began to be uttered, that The Bulletproof Tiger found a focal point, a descriptor, for their music. By having a reference point for their cacophony, they were able to shape their output and direct it towards a waiting audience. 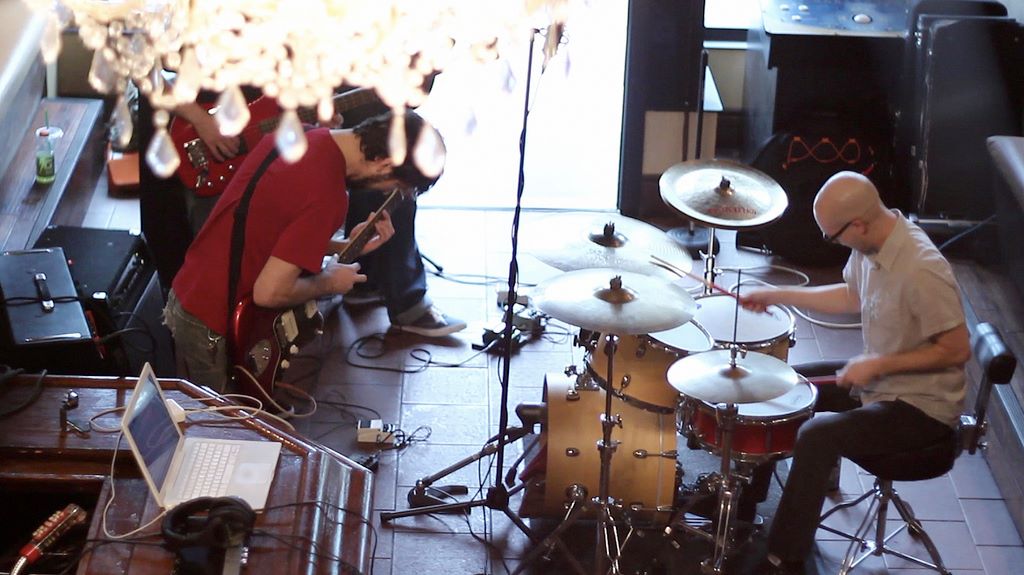 The three Tigers recruited a second guitarist and fourth member, Drew, who ended up renting a house in Windsor with Corey in 2008. This became their new jam space, and the location where the band wrote and recorded their 2009 EP, Stab the New Cherry. Windsor and southern Ontario was where they initially performed their material, gaining attention for playing math-rock in a town with a strong punk and metal scene. They then began making the four-hour drive across the province to Toronto, before deciding to move there permanently in 2010 to focus on their direction (‘the beginning of the end’, Corey recalls). They released their debut album You Wanna Kiss About It? on Japanese label Friend of Mine Records in 2011. To be on a label that would eventually see releases from bands such as TotorRo and Invalids would surely be an indication of prestige (but Corey appears disinterested when I try to suggest that, for many, YWKAI? is considered a gateway into math-rock). 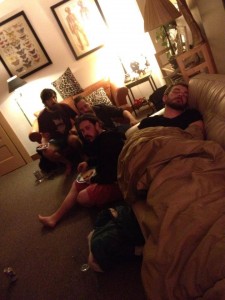 The writing and recording of the album took place in their shared house, and was the result of four people writing independent parts. Each player would create a detailed lead that both rhythmically conflicted with and complimented what the other was playing, united only in key. Corey tells me that it sometimes felt like it was simply two people playing together. Repetition as a practice technique was used methodically to help them memorise their highly complex and unpredictable parts.

The playful double-meaning of the album title is indicative of the playful personalities that make up The Bulletproof Tiger. Conceived whilst stoned during one particular drunken night, it is evident that they don’t take themselves too seriously – a divergence from the ‘mature crowd’ that we both agree this genre attracts. A stand-out aspect of YWKAI?, before one even listens to the music, is the provocative, slightly unsettling artwork. The child on the front cover is James’ one-year old niece. Corey puts it bluntly: “It was a funny close-up of a dirty mouth of a young child. We thought that was funny”. The back of the release contrastingly reveals a more innocent side to the imagery.

Juxtaposition is ubiquitous throughout TBT’s work, perhaps sometimes to their detriment. Track 4 on the album, a three-and-a-half minute compelling jazzy waltz that undulates and dazzles, is consigned the title ‘Our Band Name Sucks’. Not surprising, given the alcohol and weed-influenced conception of many of their song titles.

The move to Toronto not only enabled the band to create the album, it allowed them to do short tours in Ontario and Quebec. In Toronto, they regularly played with a local band that are still gigging: Life in Vacuum. Playing in Montreal was made possible by hooking up with Gulfer, and the two bands played extensively together. After a series of establishing gigs, The Bulletproof Tiger were able to do shows in the United States. One particular show in Northampton, Massachusetts, saw the band befriend Giraffes? Giraffes! – a friendship that would prove to be very useful. The duo became regular tour partners and TBT jumped at any opportunity to play alongside their long time musical aspirations.

Once they stepped outside Windsor and traversed the border into the US, the band started to realize the stake they had in the scene. Corey recounts to me his feelings of kinship when Noxious Foxes, whose album Legs is one of his all-time math rock favourites, asked TBT to play with them in Brooklyn, stay with them in their two-floor studio, and eventually record with them. During a show at Schuba’s in Chicago, TBT were elated upon finding out Ezra Sandzer-Bell, the bass player from Piglet, was an active fan. He had, in fact, been waiting for their show with great anticipation. A future encounter on the street with guitarist Asher Weisberg almost led to the two bands playing a show together, had Piglet not disbanded.

TBT eventually started getting better shows with better lineups. They opened for Tera Melos and TTNG, the latter of which subsequently crashed at the band’s house. Drinking with your heroes is always a memorable experience, Corey tells me. They even got the opportunity to play in Japan for two weeks, through the head of the label that released their album, but they ended up breaking up right before they could make that a reality. This seemed to happen just as they ‘were just about to start playing the good shows’. Their determination and perseverance is not without a sense of melancholy – wider recognition was visible on the horizon, but interpersonal relationships within the band had broken down. James quit right after the TTNG show, and a replacement drummer had to be found for the month-long USA tour that the band had booked for themselves. Soon after this, in 2014, Joe moved back to Windsor and that felt like the end. Alcohol consumption and the subsequent depression reared their ugly heads.

Drinking was prevalent throughout their experience as live performers. The whiskey helped to calm the nerves and get the girls; but how quickly the good times can turn sour, as Corey tells me that this joyful and social activity ultimately became the band’s demise. The 24-hour accessibility of Toronto’s bars and liquor stores proved too much of a good thing; a stark contrast to Windsor’s restrained nightlife. The good times stopped being good, so they had to move on.

But that isn’t to say that the musical spark was extinguished. Corey has been working on a solo project that may or may not be called Coco, and was recently the best man at James’ wedding. Drew works for a computer tech company and has just bought a house close to Toronto. Joe has written a few songs back in Windsor, the drums of which are being learnt by Kenneth Topham of Giraffes? Giraffes! Corey will be contributing guitar to this project. When I asked him if the playing style would be what we are used to from TBT, Corey told me, “the one with Joe and Ken, probably. Mine… I will still play my style. It will still be math rock”.