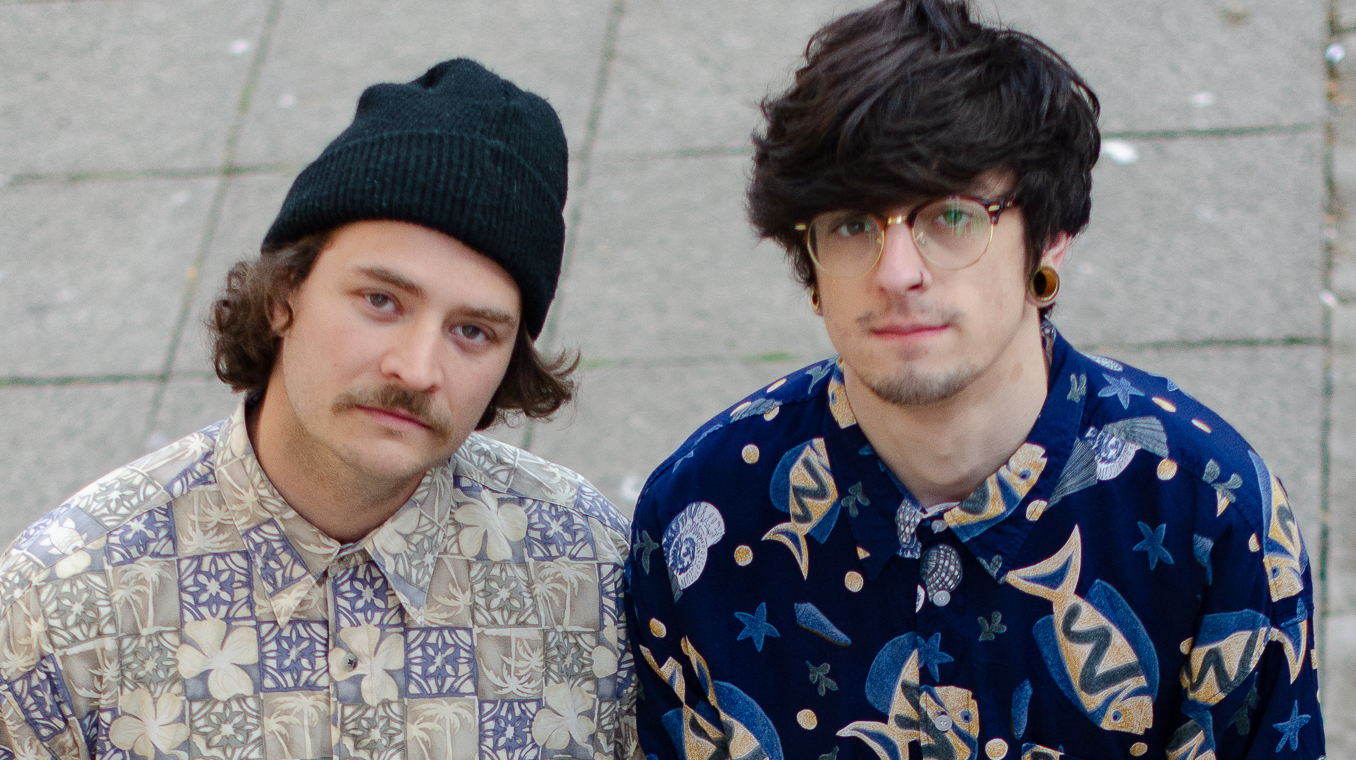 We love duos, no question about it. There is something special about them. It’s probably the simplicity of the set up, and how only two people can explore so deeply into getting sounds out of their instruments. It also has to do, I reckon, with the way both musicians understand each other almost symbiotically.

From Hella to standards, we have known a fistful of two-piece bands in the last two decades, coming from all around the globe, and, as a new addition to the pack, I bring to you Let’s Swim Get Swimming. Paddy and Tom, the lads from Brighton, UK go back to those 2000-ish roots and soak them in a fresh re version of math rock. Having played Bad Pond Festival earlier this year, and as a part of ArcTanGent 2022 line up, Let’s Swim Get Swimming are aiming to become a regular on your playlists.

‘Have aged like milk’ is their newest release. A 5-song EP fully lactose-loaded cup served with just the perfect amount of irregular stoppage, angular melodies, rampaging guitar effects and, as an appetizer, a metal-based drummer to start the day energized and full of hype. Produced and mastered by none other than Juan Godfrid (whom, as you have read before, is the mastermind of anomalia ediciones), this EP walks by itself to become a must in your everyday repertoire. Just to have an idea, Juan put it like this, when he introduced me to the band: ‘We have the new Ian Williams here’. And, speaking of, they have signed with anomalía ediciones for further releases.

But let Paddy and Tom speak their minds about themselves. Regardless of the distance, bless the WWW, we were able to chat a bit:

Fecking Bahamas: Guys, how did the band start?

Let’s Swim Get Swimming: After two shakes of the goats tail, a young, but very handsome guitarist was born. Through a shared love of math-rock and all round silliness, Paddy was magnetised to Tom and his charismatic charm. Offering love, care and hectic drumming, it was a difficult opportunity to turn down- one to be snapped up by young Paddy (in 2017). In short, we met at university. The old guitarist left, Paddy joined and we haven’t stopped giggling since.

FB: Let’s Swim Get Swimming is kind of a weird name. Where does it come from?

LSGS: Well actually, when we started out we threw around a bunch of different names and actually got torn between ‘Let’s Swim’ and ‘Get Swimming’… So we just mashed them together. We did the ‘festival test’ to see if the band name would suit headlining ArcTanGent festival and once we saw that it looked great, it was decided. The ‘DK Midnight Chalker Logo’ was born (we still haven’t bought the premium font, so can’t put the number 4 on anything.)

LSGS: Both of our main influences differ massively, but compliment each other well. Tom is a massive pop-punk fan ie, Blink 182 & Sum 41, but was previously a metal drummer, which benefits the hectic playing style he has refined over the years. Paddy was introduced to instrumental music through the likes of Chon, Plini and Monobody, but in his younger years, could be found listening to Periphery and Tiny Moving Parts. Though both do have common interests within music, there are multiple genres to thank for Let’s Swims’ unique technique and approach to music.

FB: Tell us a bit about the process of composing.

LSGS: So usually it will start with a riff or an idea that is poorly sung by Tom (which Paddy will try his absolute best to interpret), then usually the ideas start flowing. Due to the band dynamic and being best buddies outside of the band, rarely there are disagreements in terms of compositional ideas and if one were to disagree, eventually someone would compromise (Paddy, it would definitely be Paddy).

FB: So what are your plans for the future?

LSGS: Get a haircut, get a real job and continue making sweet mathy bangers. Only kidding… (kinda). Let’s Swim are hoping to continue touring, with the inclusion of Europe and other continents in the next year or so, as well as writing and releasing a second album in 2023.

FB: Any recommendations for the readers?

LSGS: Check out ‘Have Aged Like Milk’, the new EP, Let’s Swim are super proud of it and can’t wait to share some more music with you all. Just remember, ‘if it looks like seaweed, then it probably deserves a medal’. Keep an eye out for the 2022/2023 tours as they could be hitting the streets near you!

The milky boys have a lot more music to be listened. Click here to go to their Bandcamp.